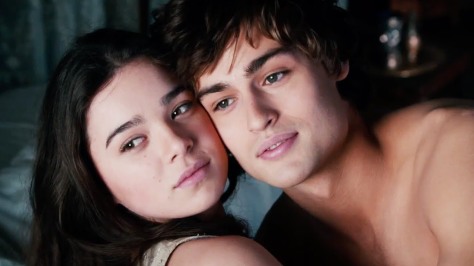 From a director we’ve never heard of, comes the most recent adaptation of William Shakespeare’s Romeo and Juliet, starring a bunch of actors we sorta know, including Chuck Bass and Nick Brody (I mean, Ed Westwick and Damian Lewis). Many of the cast and crew have their roots in television, which may partly explain why this version of Romeo and Juliet wasn’t too crash hot.

I have heard some reviewers compare the current film to Baz Luhrmann’s superior version of Romeo and Juliet (1996) and ask why it was necessary to make another adaptation. While obviously Baz is hard to beat (he is THE SHIT) it’s been 18 years and it’s freakin’ Romeo and Juliet – people can remake it as much as they want as far as I’m concerned. Personally, I think the best version is West Side Story (Jerome Robbins & Robert Wise, 1961) and I usually watch all other versions of Romeo and Juliet going “Okay, so the Capulets are the Sharks”, “Oh so he’s Riff” and “THEY’RE ABOUT TO RUMBLE!” (Yes I did that with the current version too). This definitely wasn’t the best version (far from it) but it’s a story that will never grow old and one that has themes still relevant today i.e. teenagers being idiots risking all for love.

I’m sure we’re all familiar with Shakespeare’s Romeo and Juliet and so it’s not a spoiler to say that the two title characters both end up dead. It is a classic and a great story, even if some of it is a little ridiculous. Most notably, the notion of love at first sight. They meet at a party and they’re “in love” before they’ve even exchanged words. It might have been believable if they’d snuck out for a quick root, as opposed to GETTING MARRIED THE DAY AFTER THEY’VE MET. That’s clearly silly. You’re probably going to break up in a week anyway. Unless you die first. Oh…

Despite the obvious issues with the story, it is still one that I personally will never tire of because it really is beautiful. I’m not the biggest lover of Shakespearean language, simply because I have no idea what they’re saying half of the time (I think ‘thy’ means ‘your’? That’s about the extent of my knowledge). So I am one of those people who prefers some of his plays for their plots rather than the lines (apparently it should be the other way around if you have any sort of intelligence/ pretentiousness). I found the language quite irritating in this, and I put it down to my own ignorance, however, I did find out afterwards that screenwriter Julian Fellowes (Downton Abbey) adapted much of the original prose. So maybe it was his fault. Let’s go with that.

It is possible that the issues with the language were also to do with the acting. There were many instances where I had difficulty distinguishing between complex language and bad acting, most notably with the two leads. Hailee Steinfeld and Douglas Booth were on and off – they certainly looked the parts (I love that they actually cast a 17 year old as Juliet) but Steinfeld often rushed through her lines which made me partly admire her articulation but ultimately meant the words were less emotive. They definitely both had the pouty-McPout-pout look going on – sometimes I felt that Booth’s lips were a bit too big for his face. Kodi Smit-McPhee as Benvolio pretty much spoke with an Australian accent which annoyed me, but his acting was pretty impressive in parts (he does the fake tears well). I’m undecided on Ed Westwick (aka Gossip Girl’s Chuck Bass) as Tybalt – he was a bit ridiculous and one-dimensional but I suppose that’s the role. Stand-outs were Paul Giamatti (of course) as Friar Laurence and Damian Lewis (aka Homeland’s Nick Brody) as Lord Capulet.

The costumes were nice to look at and there were some gorgeous sets, but there were some lame-arse cinematography/ editing/ directing/ one-of-those moments. The first time we see Juliet she turns and laughs in slow-motion – LOOK HOW INNOCENT AND BEAUTIFUL SHE IS. Yeah, no need to punch us in the face with it. The jousting scenes were also pretty bad. The music was WAY over the top – we did not get a break from the excessive score. The whole film wasn’t particularly well-made or well-acted, but to its credit I was never bored, despite already knowing exactly what events were going to ensue. I think that’s more to do with the classic story on which it was based, however. I did shed a tear at the end, not because they died, but because Paul Giamatti is such a good actor. If you generally enjoy the story of Romeo and Juliet this won’t be a complete waste of your time, but it’s nothing special. On the plus side, some of it was so bad it was good. So if you’re up for a few laughs (and I did laugh at the ridiculousness of some of it), check out this adaptation of one of the greatest tragedies of all time.

Watch the clip below for a different take on Romeo and Juliet from the movie Reefer Madness (Andy Fickman, 2005) – this is what enters my head every time I hear the words ‘Romeo and Juliet’ (you may need to follow the link to Youtube)