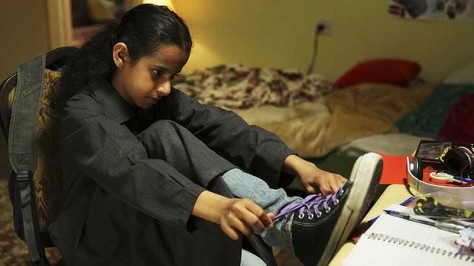 Wadjda is a ground-breaking film, in that it is the first feature length film to be shot entirely in Saudi Arabia and the first film made by a female Saudi director (Haifaa Al-Mansour). Due to Saudi Arabia’s restrictions on women, Al-Mansour was not allowed to interact with the male crew members, meaning she directed some scenes from a van and used a walkie-talkie for others.  There are in fact no cinemas in Saudi Arabia either, which means that the film’s reach there may be limited (although it may be viewed on DVD). Not surprisingly I spent much of the film feeling depressed about how backwards some parts of the world are, however Wadjda offered some small glimmer of hope. 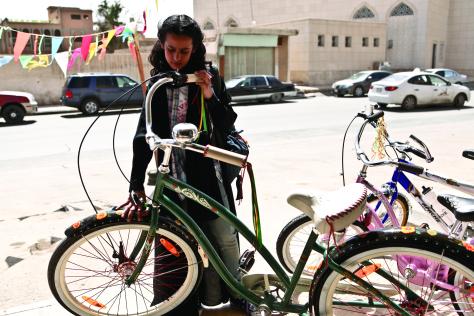 The film tells the story of ten year old girl, Wadjda (Waad Mohammed) who defies cultural gender norms by saving up her money to purchase a bicycle. When her school announces that they will be running a Koran recitation competition with a hefty monetary prize, Wadjda throws herself into the challenge whole-heartedly. Knowing very little about Saudi culture, I was surprised to see that Wadjda was not an unfamiliar child to the Western viewer – she wears jeans and runners (under her abbayah when she is out), downloads music off the radio onto cassette tape, makes bracelets for her schoolmates, and is excited by the prospect of a new bike. This sharply contrasts with the portrayal of society as a whole, which is worlds apart from Western civilisation. The most obvious difference is the treatment of women, which in Saudi Arabia includes banning women from driving, requiring women to be covered up at all times outside the home, and marrying off children (which clearly results in their subsequent rape even if this was not specifically alluded to in the film).  All of these issues are present in the film and most Western audiences will sit there shaking their heads at the misery of it all. However, Al-Mansour succeeds (and assumedly protects herself) in not passing judgment on these matters, but merely showing that they occur.

Many might assume that a movie like this might portray men as the evil oppressors, however this is not the case. Most characters in the film are women, and they maintain, and sometimes even enforce, the status quo. Some would go so far to argue that the film even represents women as their own oppressors. No one character (man or woman) was overwhelmingly villainous, and most of the male characters showed respect for women. Rather it is society as a whole that is shown to be problematic, with the majority of people adhering to cultural norms because it is just the done thing if they want to get by. There are those, like Wadjda, who can strive to challenge the status quo, but not without significant risk. We see that Wadjda’s own mother (Reem Abdullah) is a free spirit at her core, but she hides this outside of the home in order to conform to society’s standards. Wadjda remains somewhat care-free herself and while we hope that she will grow up to fight against a patriarchal society, we also have to wonder whether she will retreat as she matures and learns the harsh ways of the world.

Maybe that is the reason why, despite this being a ground-breaking film in many ways, I was not overly excited by it. In addition, the acting by the kids didn’t seem great, however this is difficult to assess when I don’t speak the language (the dialogue seemed stilted), and they’ve probably barely acted before. Reviewer Jake Wilson (who I almost never agree with) suggested that “parents weary of the sexism of many Hollywood family movies should consider taking their kids to Wadjda”. Um, no, they would be bored to tears. Get down off your high horse and take them to a film like Frozen (which is clearly not sexist – not all Hollywood films are). Interestingly, Wilson could barely say a bad word about the film, despite only giving it three stars. On this we actually do agree. What was missing? I don’t know. Optimism? It’s in there, but it seems naïve.