To see a Woody Allen film, or not to see a Woody Allen film? That is the question. His films tend to be hit and miss, and then there’s the question marks around his character following accusations of child abuse. Over the last decade we’ve seen the wonderful Midnight in Paris (2011), Blue Jasmine (2013) and Match Point (2005), but we’ve also had to suffer through To Rome with Love (2012), Whatever Works (2009) and Melinda and Melinda (2004). Scoop (2006) and Vicky Cristina Barcelona (2008) were average (and the latter was nothing without Penelope Cruz). Expectations weren’t high for Magic in the Moonlight, perhaps because it feels like we’ve seen this all before. Americans abroad in Europe, with Cole Porter music playing over the same style opening credits, with a dash of magic thrown in. There is, admittedly, something rather enchanting about all of that, so I suppose I’ll bite.

Colin Firth stars as Stanley, a magician and debunker of fraudulent spiritualists. His friend and fellow magician Howard (Simon McBurney) enlists his help to expose young American medium Sophie (Emma Stone) and her mother (Marcia Gay Harden). Sophie has bewitched the Catledge family, including the besotted Brice (Hamish Linklater) and his mother Grace (Jacki Weaver). Stanley is initially sceptical, but is soon under Sophie’s spell. 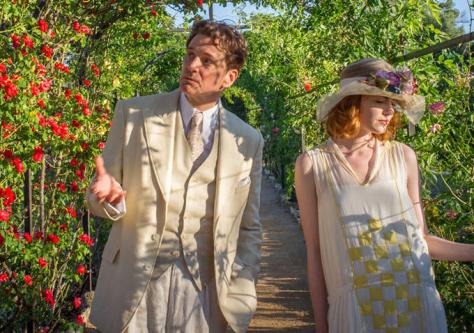 Colin Firth is hilarious as Stanley, but not particularly likeable. He is incredibly patronising towards Sophie, even after he opens up to the possibility of magic. That she would fall in love with him seems unlikely, but I suppose it’s plausible because he’s Mr. Darcy. I was disappointed to discover that he starts the film engaged to another woman, but then I realised that was no surprise, because it’s a Woody Allen film. And what would a Woody Allen film be without a good dose of cheating? The age difference between Colin Firth and Emma Stone is pretty significant too – 28 years – but then I remembered, Woody Allen. 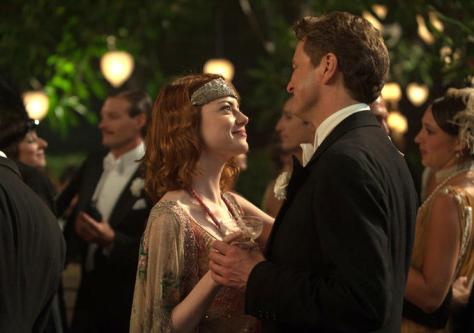 I can’t quite decide whether or not I like Emma Stone, but she definitely suited her role. There was meant to be a running joke about her eating all the time (though it didn’t continue for the whole film) which I didn’t get the point of – was it to prove that Emma Stone does actually eat? It was odd because the joke seemed to disappear in a puff of smoke. A bit like Woody Allen’s dignity.

The magical element is good fun, and to Allen’s credit, I wasn’t quite sure whether Sophie was going to be exposed as a fraud or if the film was going to go along with the notion that magic may indeed exist. However, those more familiar with Allen may know where it’s heading. There was one magician’s trick in particular that I enjoyed, even if it was a little predictable.

The European locations, the 1920s costumes, the jazz music, and the overall decadence is nothing new for Allen, but I enjoy all of these things so I can’t really object. The film has its sweet moments, and Colin Firth is great fun to watch, but I think I may be tiring of these wanky, cheating, condescending types of characters we so often see in Allen’s films. His style is certainly his own, but are his films still unique? Maybe not. I think the magic is fading.

One thought on “FILM REVIEW: Magic in the Moonlight”