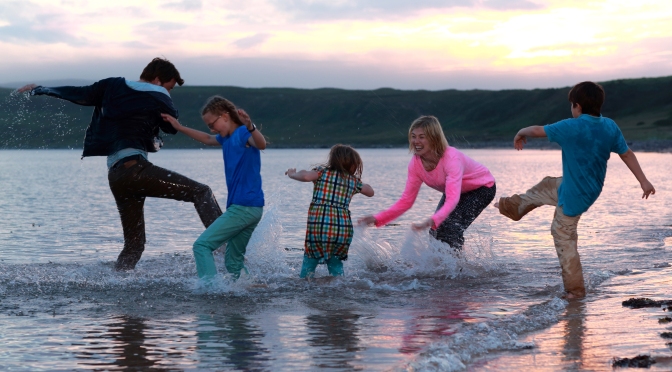 Amazing Amy is BRITISH! I’d almost forgotten she existed before Gone Girl. But here’s Rosamund Pike reminding us that she too can play normal, boring characters. But she’s not the main player in What We Did on Our Holiday, where all adults play second fiddle to the kids. Written and directed by Andy Hamilton and Guy Jenkin who brought us the hilarious British television show Outnumbered, What We Did on Our Holiday follows a similar pattern, but with a sea change. Frustrated parents, hilarious children, laughs all round.

Doug (David Tennant) and Abi (Rosamund Pike) take their three children – Lottie (Emilia Jones), Mickey (Bobby Smalldridge) and Jess (Harriet Turnball) – on a road trip to Scotland for their grandfather Gordy’s (Billy Connolly) birthday. While the adults bicker as they prepare for the party, Gordy takes his grandchildren to the beach for some quality time together.

My “what I did on my holiday” journal entries in primary school generally focused on the food that I had eaten. The kids of this film would have had quite a bit more to write about, and the plot takes an unexpected turn about half-way through. It managed to be moving, whilst still being consistently laugh-out-loud funny throughout. It’s a film that reminds us of the sweet innocence of youth, and that sometimes children can be smarter than adults.

There’s a decent bunch of Brits assembled for the adult roles, with David Tennant and Rosamund Pike adding in a fair few laughs of their own as the parents, along with Ben Miller as the uptight wanker uncle and Amelia Bullmore as his unstable wife. Billy Connolly does his usual thing but with less swearing. In the child roles, Harriet Turnball is a highlight, with Bobby Smalldridge not far behind. Emilia Jones acts as the voice of reason, which isn’t quite as entertaining, but she’s the real heart of the piece.

Though it feels more like a movie-length TV episode, What We Did on Our Holiday acts as welcome comic relief amongst all the dramatic releases currently on offer, though don’t expect it to be completely chipper. If you’re an Outnumbered fan, this will certainly appeal.