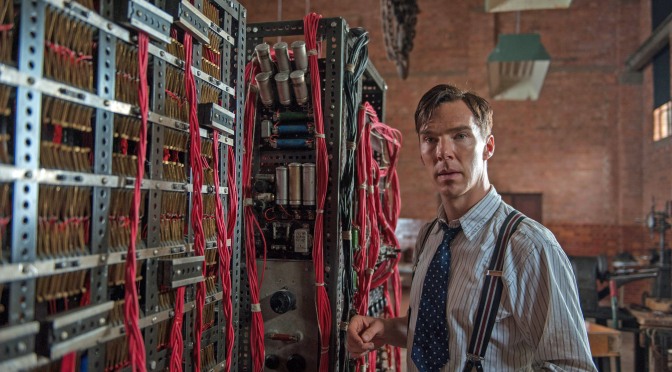 The Imitation Game begins with Benedict Cumberbatch telling us to pay attention, listen carefully, because he will only say this once. Well if this is anything like Tinker Tailor Soldier Spy I’m screwed, but thanks for the warning, babe. Cumberbatch stars as Alan Turing, an English mathematician who managed to break the supposedly unbreakable Enigma code used by the Nazis in World War II.  I didn’t totally understand how the code-breaking worked, but the explanations provided were decent enough, and refreshingly succinct.

The obvious reason to see The Imitation Game is for our main man, Benedict. Hopefully the Cumberbitches will be able to cease their steady stream of tears over his recent engagement long enough to watch this fine performance. In good news, Alex Lawther does an incredible job copying Cumberbatch’s mannerisms to play young Alan, and I’m pretty sure he’s not engaged yet. Keira Knightley and Matthew Goode both add doses of likeable toffiness, making up a particularly fine cast.

Director Morten Tyldum should be feeling pretty chuffed with himself in his English language feature debut as Oscar buzz mounts and the possibility of a Best Director nomination looms. For a relative unknown he’s done well, though I can’t help but wonder if the strengths of this film are being overestimated – because of what it’s about and because it’s a British film being released at this time of year. It feels like an Oscar film, but is it extraordinary? Alan Turing certainly was, but I’m not so sure about the film, which reportedly takes many liberties with the truth. It looks sharp, Cumberbatch is divine (and deserves every nomination he gets) and the production values are clearly high standard. But the screenplay by Graham Moore (his first film) left me wanting. It wasn’t so much the dialogue – which was actually quite good – but the way Turing’s story was told.

Turing’s contribution to the winning of the war is remarkable, and few will leave this film without feeling genuine admiration and respect for the man. Unfortunately, it’s also really rather depressing what befell Turing after his achievements, and I left this film feeling deflated. It’s depressing how much more homophobic the Western world was back then, and his treatment by the government was abhorrent. The Imitation Game didn’t spend too much time on this development and this didn’t seem right. The man was chemically castrated for being gay and it gets mentioned in one fleeting moment of dialogue at the end. And then we get told in freakin’ post script – spoiler alert re: true events – that he committed suicide a year later. Less time could have been spent on boring code stuff, and more on his mental health issues and the effect of the court-imposed medication. Perhaps the filmmakers thought this would be too depressing for a man who should be remembered primarily for his impressive achievements. Unfortunately, they appeared to brush over important aspects way too readily. For some, hints of Asperger’s might be enough to consider his character well-developed, but it wasn’t enough for me.

I can imagine that many will feel the need to heap praise upon this film, simply because it has that King’s Speech kind of vibe (read: a British true story during Oscar season). Heap it all you want on Benedict Cumberbatch, but the film itself doesn’t quite seem worthy of all the hype.