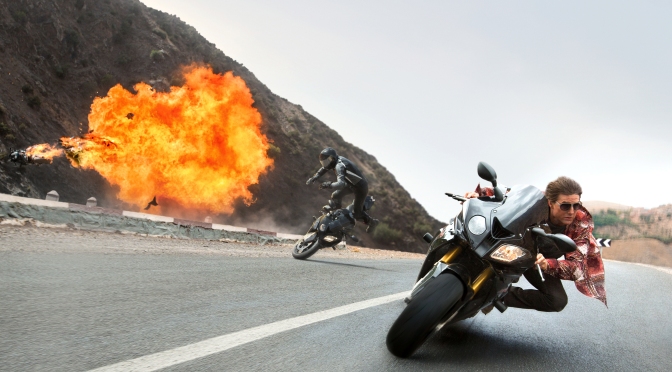 You know a film has done its job when Tom Cruise is facing near death and you actually want him to survive. And while it’s tempting to hope that any Cruise vehicle will be a massive flop, they’re often annoyingly quite decent. You’d think with its fifth instalment that a franchise would be reaching its expiry date, but there’s no end in sight for Ethan Hunt – at what age do secret agents usually retire exactly?

Cruise reportedly did all his own stunts, one of which involved him grabbing onto the side of a plane 1.5km above ground. Is he crazy? Well yes, the aliens probably told him to do it. Christopher McQuarrie directs the action sequences with aplomb, including a magnificent car and motorcycle chase, a high-pressure underwater mission, and a scene at the Vienna opera which is the best in the film. Nessun Dorma accompanies backstage assassination attempts, and its refrains are incorporated into the film’s score throughout. And let’s not forget that killer theme song – surely one of the best.

The screenplay, written by McQuarrie (whose more impressive writing credits include The Usual Suspects and Cruise’s previous film, Edge of Tomorrow) is strong for the most part. It avoids convoluted political talk, and is smart without being confusing. It does seem a bit of a cop-out when a character suddenly pulls off his face to reveal IT’S ACTUALLY ETHAN HUNT, but then we have to remember it was written by the same guy who wrote The Tourist (we’ll forgive him that one). It does, however, successfully avoid cliché in other instances – there is no big pash between Hunt and Faust, which is just as well because Tom Cruise could well suck out her soul in the process.

There’s plenty of BMW product placement, and seeing Cruise behind the wheel doesn’t exactly do the BMW driver stereotype any favours. But you do have to root for Hunt, and it’s to Cruise’s credit that he so often manages to gain favour with his audience. Rebecca Ferguson is not entirely likeable, however that suits the role just fine as we question exactly where her loyalties lie. Simon Pegg adds some humour, while Alec Baldwin as the director of the CIA is glorious as always. For an A-lister Jeremy Renner doesn’t do all that much, but there are rumours he may be paving the way to take over the franchise in the future. Good luck prying the lead out of Cruise’s dying scientologist hands, Jez. He doesn’t seem to be going anywhere in a hurry.