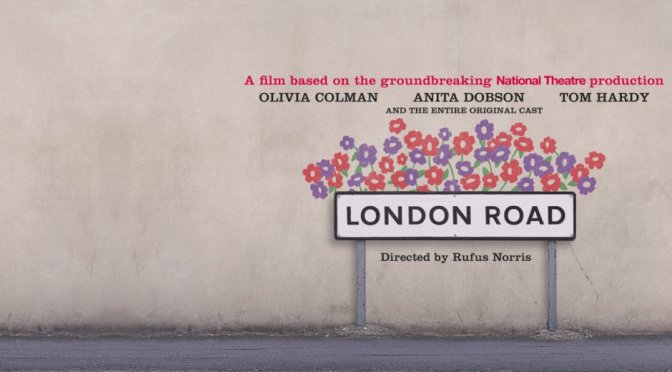 Tom Hardy in a musical. I AM SOLD. But hold your horses, musical fans. This is not your typical musical and Tom Hardy is in just the one scene. But it’s worth checking out for its sheer originality.

The subject matter is interesting to say the least. In 2006, five prostitutes were murdered in Ipswich, Suffolk by truck driver Steve Wright who was living temporarily in London Road. Following his arrest, the residents of London Road fought to reclaim their street as more than just a crime scene. Playwright and screenwriter Alecky Blythe, known for pioneering ‘verbatim theatre’ interviewed the residents in the aftermath of the murders, and with the help of composer Adam Cork created the British musical, London Road. Directed by Rufus Norris, it debuted in 2011 to universal acclaim and Olivier Award nominations, and has now been transferred to the screen with Norris still residing as director.

The term ‘verbatim theatre’ refers to plays or musicals which are constructed from the exact words used by interviewees. Every ‘but um’, ‘you know’, ‘sort of’, and stilted sentence construction is maintained, which is almost entirely at odds with well-written dialogue. Every song in London Road is based on real recordings by the residents, other prostitutes, and media, and while it plays around with them to create workable songs, the original words remain intact. While this style might not be musical enough for some viewers (and indeed it pales in comparison when you’ve spent all week listening to the new Hamilton Broadway cast recording), it is clever enough to appeal to some audiences. My favourite number, ‘It Could be Him’ has two teenage girls giggle and gossip about the potential for every man they come across to be the murderer, and it’s almost like Little Britain’s Vicky Pollard set to music.

Some may consider the subject material to be unusual for a musical, but keep in mind there have been musicals about mental illness, AIDS, sexually repressed teenagers in 19th century Germany, and a barber who slits his clients’ throats, so nothing is really off limits, is it? The focus is first and foremost on the residents who were on the periphery of the newsworthy events; we don’t see Steve Wright, nor do we see the murders take place. By shifting the focus to these ordinary folk we see a side of such a story that isn’t often explored – the fear that grips a community, and the darkly comic grievances of those indirectly affected. In fact it’s quite difficult to care about some of these characters too much – yeah you had a murderer on your street, but you’re not the dead hooker in the morgue are you? Olivia Colman’s character Julie says something particularly cold late in the piece, and from that point on I had no empathy for her whatsoever. Thankfully, those with the real problems – the junkie prostitutes who remain – are afforded some attention in the story, as without this the whole thing comes across as rather selfish and insensitive.

Much of the National Theatre production’s original cast appear in the film, along with Olivia Colman, Anita Dobson, and Tom Hardy who plays a creepy taxi driver obsessed with serial killers (written specifically for the film). It’s not a stretch to buy them as ordinary people, and the film as a whole has a uniquely British vibe. A few dance numbers are laced throughout (if you can even call them that) and it will feel familiar for anyone who’s seen any contemporary British musical, even if it is certainly different in many ways. It’s not for everyone – there were three walk-outs in the screening I attended – but if you make informed movie choices, you should know what you’re in for. Check out the trailer to get a sense of whether this is something you can stand. If you can, it’s one of the most original films to come out this year. And even four minutes of Tom Hardy is worth it.