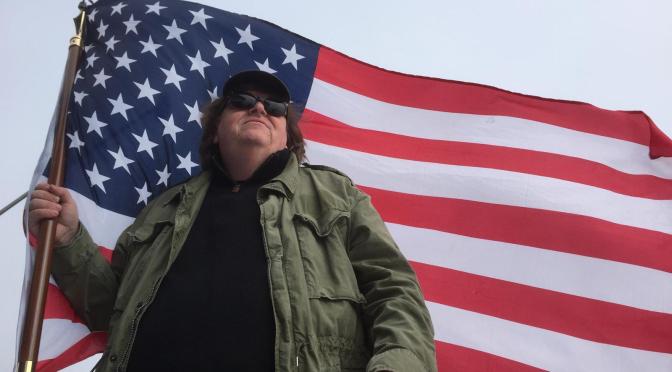 Sometimes it’s easy to idolise America – the supposed land of the free, the home of Broadway, the place where dreams come true in the movies. But then you remember all that is wrong with the United States – their gun laws, their healthcare, their working conditions, and that Donald Trump actually has a shot at the presidency, which speaks volumes of the failings of the education system.

Having previously tackled gun laws, terrorism, healthcare, and capitalism, Michael Moore’s latest venture sees him travel across Europe (with one extra stop in Tunisia) to ‘steal’ their great ideas. In each country he focuses on a specific issue that is being done right, while the United States languishes far behind. In Italy we hear about their holiday entitlements. In France we see the nutritious lunches made for the students. Slovenia shows off its free university education while Finland shows why its school education system is the best in the world. In Germany there is emphasis on citizens’ well-being, as well as their acknowledgement of their dark history. In Portugal drugs are decriminalised, and in Norway the prison system focuses on rehabilitation over punishment, and affording dignity to its inmates. In Iceland, women lead, and in Tunisia we see that major regime change is possible. Meanwhile Moore reminds us of America’s attitudes and policies in these areas: it’s not pretty. A clip of a Texan politician defending abstinence sex education is particularly hilarious.

Moore presents a fairly utopian view of what America could be like, though he does acknowledge that he’s cherry picking. Each of these countries likely has their own flaws too. Nevertheless, he’s eager to show just how good a country America could be if it made some serious changes. As an Australian viewer it felt depressing at times to consider how similar we are in some respects to America, and how we too lag behind these European nations in various ways. He didn’t bother to visit Australia, and it’s unclear if it was the added distance or because we just aren’t world leaders in any one area. Our obvious areas of strength, gun control and universal healthcare, have both been the the subjects of Moore’s previous documentaries, Bowling for Columbine and Sicko, and therefore didn’t warrant much of a mention here.

What particularly hit home, however, was that in order to enact some of these ideas even in Australia, we would require a big mentality shift. I found mine challenged at various instances while watching this film – 21 years is the maximum jail time for a mass murderer? Decriminalising drugs actually lowers their use? Kids can thrive with just twenty school hours a week and no homework? And yet, there is evidence that all of these things work. A journalist from Tunisia laments America’s lack of curiosity, and makes what is perhaps the most important point of all: other countries know plenty about America, but America remains insular in its own worldview. She offers a simple remedy: using the internet… for more than just streaming the Kardashians.

Conservatives probably won’t even see this film (considering Moore a “filthy socialist” no doubt) and if they do, they’re likely to remain sceptical of the possibility for change. But as Moore points out, gay marriage wasn’t legal anywhere in the US just three years ago, and is now legal in all fifty states (the realisation that we’re behind even America on this is disheartening to say the least). Similarly, the Berlin wall was once considered something that would stand forever. But times change. There’s even a sense of patriotism imbued throughout Moore’s film – which seems unusual for him, but a clever move to convince viewers.  He reminds his audience – as do his foreign interviewees – that America came up with many of these ideas in the first place. And they can return to them. But they better hurry up or we’ll soon have a monster as president.

3 thoughts on “FILM REVIEW: Where to Invade Next”