Due to time constraints, here is a quick overview of the films I managed to catch during my holidays. All recommended.

Nominated for an Oscar for Best Foreign Language Film, Mustang is a Turkish film about five sisters living a sheltered life. One by one they are married off, with the youngest, Lale (Günes Sensoy) determined to stick it to the man. Highly reminiscent of Sofia Coppola’s The Virgin Suicides, Mustang is at once beautiful and disturbing. Director Deniz Gamze Ergüven has a subtle approach, never going for the money shot but instead opting for such moments to occur off screen, with their impact remaining strong. The rebelliousness of youth is a universal theme that transcends cultures, which makes the limitations placed upon these girls all the more affecting.
4.5 stars

More anger is directed at Wall Street in this crime thriller starring our favourite George as the host of a finance show. When Kyle Budwell (Jack O’Connell) loses everything due to a bad tip by Lee Gates (George Clooney), he holds the studio hostage while they are on air. It’s somewhat formulaic but sometimes formula just works. It’s good fun, maintains viewer interest, and incorporates a great deal of humour into the drama. And it was a hell of a lot less difficult to follow than The Big Short.
4 stars 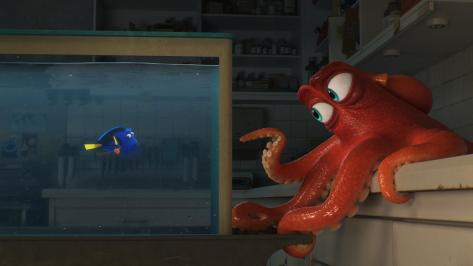 She’s back after thirteen years, so move the hell aside kids, because the adults have been waiting for this one. Dory treads a similar path to Nemo – this time it is Dory (Ellen DeGeneres) looking for her parents, rather than the other way around – but it still offers something fresh and fun. To be honest, I haven’t seen Finding Nemo since it came out at the cinema, so I don’t remember it well enough to compare. The action shifts this time between the ocean and an aquarium, and there’s no shortage of vibrant characters. Ed O’Neill as grumpy octopus Hank and Ty Burrell as Bailey the beluga whale are highly entertaining additions to the voice cast.
4 stars

A crime/action/comedy from the mind of Shane Black, responsible for the hilarious Kiss Kiss Bang Bang back in 2005. In a similar vein, The Nice Guys sees Russell Crowe and Ryan Gosling team up to investigate the death of a porn star. The 70s vibe makes it all the more fun and it has a killer soundtrack to boot. Young Aussie Angourie Rice stars as Gosling’s daughter, and you can expect to see much more of this young actress in the future. Ridiculous and violent, The Nice Guys showcases Gosling’s knack for comedy, and Crowe isn’t too bad either. And for fans of pretty boys – Matt Bomer. That is all.
4 stars