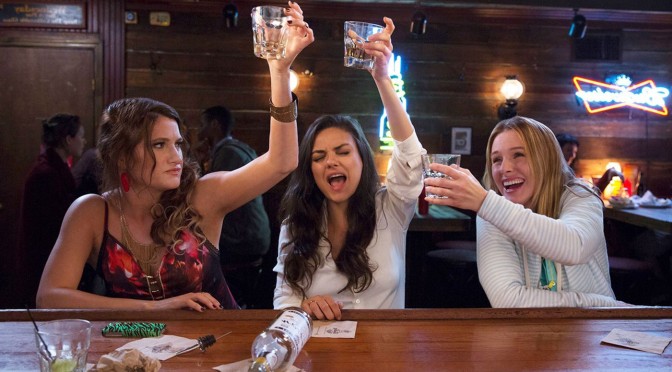 Everyone loves to judge, and everyone loves to judge mothers.  Even other mothers. It’s a jungle out there. In the schoolyard at drop off and pick up time. Or so I’ve heard. While this reviewer didn’t go into this film with firsthand experience, Bad Moms was still great fun. And while it did seem to gloss over some of the hardships of parenting, it will surely be a winner with many mums (or ‘moms’).

It’s not hard to beat Jupiter Ascending (what even?) and Mila Kunis thankfully goes back to her comedic roots as Amy, a young mum with two kids, a lazy husband, and a career. Fed up with trying to be the perfect mother, she teams up with lonely and unappreciated mother of four Kiki (Kristen Bell back to her best) and wild and single mum Carla (the glorious Kathryn Hahn). Rebelling against the status quo, she incurs the wrath of PTA leader Gwendolyn (Christina Applegate amping it up as the resident bitch).

Directed and written by The Hangover guns, Jon Lucas and Scott Moore, Bad Moms aims to entertain, and in that sense it succeeds. The laughs come thick and fast; the dialogue does not disappoint. Gwendolyn’s presentation on the rules of the school bake sale is particularly hilarious, and probably not far off the bat. It does all get a bit ridiculous at times – not a single man in a PTA meeting of hundreds, really? But then again, that scene works as a wonderful throwback to the gymnasium scene in Mean Girls. Gwendolyn IS Regina George.

One obvious criticism is that the film’s protagonist isn’t exactly the struggling mother. She’s financially stable, doesn’t suffer from body image concerns, and has two relatively well-functioning kids. There’s a scene where her friends raid her wardrobe of supposedly unsexy clothes, even though she looks like she’s in designer outfits in every scene she’s in. (And isn’t Kristen Bell getting sick of these stupid “How ugly is this bra?” scenes?) By the end of the film her life is near perfect, and she sorted it out in about a week.

But Bad Moms isn’t meant to be taken too seriously, and if anything its simplistic narrative may offer some hope for struggling mums who feel like it isn’t going to get better. It also offers a reprieve for those who feel guilty about having any me-time. Most importantly, its message for its target audience is solid. Do the best you can, screw perfection, and just try to raise kids that are decent people. Who are allowed to have sugar.