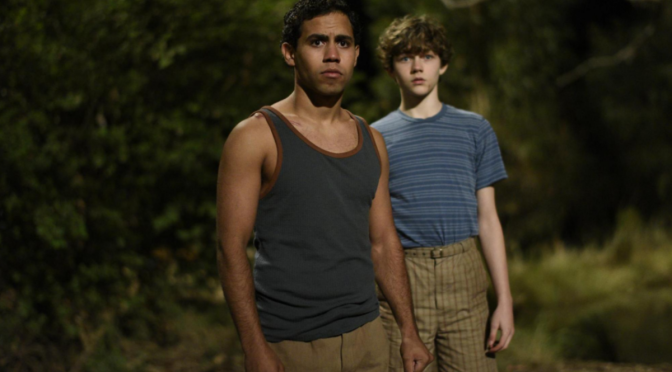 Hugh Jackman returns for one last time as Wolverine. Opening with a whole lot of the word ‘Fuck’ and a brutal fight, viewers should quickly gauge that Logan is enjoying its MA15+ rating. It’s easily the most violent film in the X-Men franchise and may well be the best given it focuses mostly on the one character and not an assortment of mutants. There’s also something very satisfying about knowing this really is the last we will see of Logan; not that we can ever really tire of Hugh Jackman, but franchises need to know when to stop, and comic book ones usually never do. That’s not to say we won’t be getting more X-Men films because $$$$. Still, it’s a refreshing change to be able to just enjoy a film like this on its own without it being all about what’s to come in future films. You know, like in most good films.
3.5 stars

Based on the best-selling Australian novel, Jasper Jones sees Charlie Bucktin (Levi Miller) trying to find the killer of a teenage girl. He’s led to her body by Aboriginal teenager Jasper Jones (Aaron L. McGrath) who will be the police’s main suspect. Set in the late 1960s, Jasper Jones captures a racist society that has parallels to Australia today. The story works as both a comment on society and a murder mystery with an adolescent focus, however the answer to the mystery may be too obvious for some. So, so obvious. But a fantastic local cast (including Toni Collette and rising star Anjourie Rice) made up for it.
3.5 stars

This was all kinds of screwed up and I didn’t quite get the point. Lockhart (Dane DeHaan) is sent to retrieve the CEO of his company from a wellness centre in the Swiss Alps. Once there, strange things start occurring and it seems there’s something in the water. While it looked like it was going to be a comment on a money-driven society, it ended up getting hella weird and also rapey. And no matter how many eels you have crawling into people’s mouths or people pulling out their teeth, nothing is ever as horrifying to a female viewer as rape. It wasn’t necessary and made me mad at the film despite having some interesting ideas up until that point. I didn’t understand the final shot either.
3.5 stars