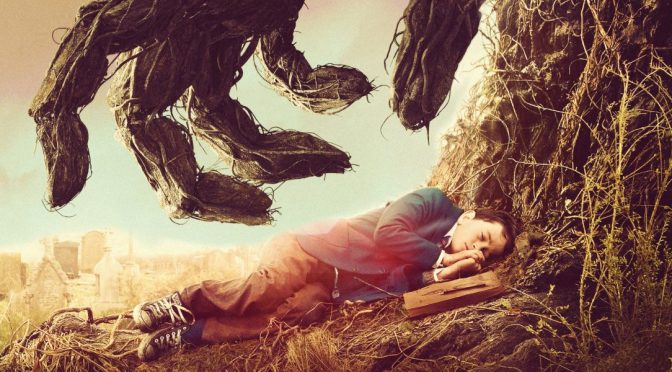 A Monster Calls begins with the explanation that its story starts “with a boy too old to be a kid, too young to be a man”. This is apt, given that the film is not clearly aimed at children or adults, but perhaps sits in some limbo area in-between. Initially conceived as a story by Siobhan Dowd, the novel was written by Patrick Ness after Dowd’s death from a terminal illness. Ness adapts his novel for the screen, with director J.A. Bayona (The Impossible) at the helm.

Conor (Lewis MacDougall) lives with his terminally ill mother (Felicity Jones) in a house overlooking a cemetery and a giant yew tree. At 12:07am the tree comes to life as a monster (voiced by Liam Neeson), who informs Conor that he will be told three stories before he must tell his own story, his “truth”. A young adolescent, Conor is confused by the lack of clear heroes and villains, and gains much knowledge from the monster while also embarking on a journey of self-discovery.

The film’s themes are primarily focused around grief, particularly a child’s experience of it.  It is unsurprisingly heart-breaking and even the most hardened viewer is likely to get hit in the gut by this grim yet beautiful story. At times the film’s message feels heavy-handed, with the monster spelling out the morals of the stories to Conor. It is unclear who exactly the film is targeted at, and it seems possible it may suffer as a result. Its exploration of a child’s experience of grief may resonate with some younger viewers (in particular, older children who have experienced it), but on the whole it feels like a film for adults; a grim, tragic fairy tale.

The film boasts strong performances across the board. Felicity Jones reminds us of what she’s capable of when given a character with heart (something Rogue One’s Jyn Erso was lacking). Sigourney Weaver dons an English accent as Conor’s not-quite-villainous grandmother, and Liam Neeson lends his calming-yet-somewhat-intimidating voice to the tree monster. At the film’s centre is Lewis MacDougall who shines in his first leading role, believable every minute he’s on screen, capturing the trauma of a first, early experience of grief.

The tree monster’s three stories are accompanied by stunning watercolour-inspired animation. Conor himself is an artist, often spending his nights furiously scribbling away with a pencil in his bedroom, but it is when the monster visits him that stories are brought vividly to life in dark tones that still retain a hint of colour and beauty. CGI is also used in the monster’s scenes, each tendril bursting with life, wrapping around Conor and his world. Scenes inside Conor and his grandmother’s houses also bear a fantastical quality, especially when 12:07 approaches.

For the most part, A Monster Calls tells a simple yet beautiful story. A subplot about bullying feels out of place and somehow unfinished, with these scenes providing the only insight into Conor’s experience of school. It seems that somewhere there is an important point to be made in this respect, but it gets lost, with these scenes ending up feeling like non-essential padding in an otherwise touching story. Overall, while it may not be J.A. Bayona’s biggest hit due to its target audience being unclear, A Monster Calls is certainly worth seeing.