In 2015’s Daddy Home, stepdad Will Ferrell vied against cool dad Mark Wahlberg for the title of BEST DAD. By the end of the film they were both winners and best buds. The critics hated it but the masses ate it up, hence the current sequel. Taking what seems to be an obvious leaf out of the Bad Moms’ franchise’s book, Daddy’s Home 2 sees the dads’ dads join them at Christmas time. In Will Ferrell’s corner is the loveable John Lithgow, while on Wahlberg’s side there’s Mel Gibson.

Like Bad Moms 2, the film feels like a very American Christmas movie, and that’s not necessarily a bad thing if you want a break from thinking too much about the horrendous state of the world. Or just a break from thinking too much at all. Where the Daddy’s Home franchise differs from the Bad Moms is in its target audience, with it aimed at the whole family. Maybe not so much if you’re a woman though. 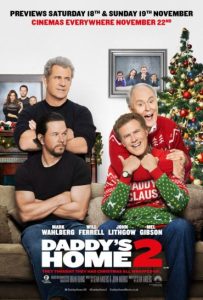 Going in, I anticipated a whole lot of sexism, which thankfully, due to its PG rating wasn’t as bad as expected. But having said that, there’s firstly not a lot going on in the female character department. Linda Cardinelli as Ferrell’s wife doesn’t get to do much more than be a semi-neurotic mum, while Alessandra Ambrosio as Wahlberg’s wife is beyond dull. There are a couple of young girls in the cast, with one of them (Scarlett Estevez) proving her strength by shooting a turkey. Only in America.

What really left a sour taste was how the young son character (Owen Vaccaro) was handled. Becoming interested in girls, he turns to his stepdad for help who tells him that he’s got to get in the friend zone, with the implication being that this is pathetic and hilarious. Then good old Mel Gibson, playing an arsehole (some stretch of the acting chops there) tells him to just go for it, so to speak. Cue entitlement from a young age and the belief that you can just kiss and grope females without consent. Honestly Sean Anders, you can do better than this.

On the positive side, this is really the only mis-step. The film includes some good value slapstick and an entertaining joke about how dads obsess over controlling the heater. A musical moment also never goes astray for this reviewer, especially when it involves John Cena – if only for a few bars. Both Will Ferrell and John Lithgow provide plenty of innocent humour, and Mel Gibson is perfectly cast as a massive dick. Overall, Daddy’s Home 2 isn’t awful. So you could say it surpassed expectations.

This review was first published on 21st November 2017 at Film Blerg.